2005 Summer Cub Camp took place at “Buddens” near Wareham in Dorset. Traditionally Cub camps have been well attended and this year was no exception. We had 25 Cubs, 5 scouts and 1 Beaver attending with 10 Leaders and I helper. To get around we hired 3 Mini Buses and a 7 tonne Truck for the gear.

Saturday – We had an easy trip down with a stop for lunch at a country park near Ringwood. On arrival it was all hands on deck to erect the tents and set up camp. The campsite was quite busy with some 14 groups camping. I think we needed a bigger site but once every thing was in place it looked…. well cosy. First nights on camp are always late and noisy this was no exception.

Sunday – Despite paying or was that praying for good weather, the dry spell came to an end and Sunday was mostly wet. Fed up looking at the weather we decided to get out in it and went to Tynham (the village that stood still) Then a short ride over to Lulworth cove to throw stones at the seagulls, turn over rocks and torment any sea life that remained on shore! We returned to camp for tea. The camp backed on to a wooded area, which the boys made full use of. I don’t know what they did in there but they never came back clean.

Monday – Again another dull day so while we were waiting for Graham and Sue to come back from shopping we had a quiz. The last question was a decider. Could the cubs name and pronounce all the leaders full names. Sounds easy but it took nearly 25 minutes to get it right. After the marathon quiz we tripped off to “Monkey World” where suprisingly they had monkeys. The high light of the day came when one of the orang-utans managed to break an electric fence. In his hurry to fix the situation a keeper had slipped and cut his face and so without the relevant facts rumours of killer Monkeys abounded nothing to do with Akela of course. Then back to camp for tea and ping pong etc.

Tuesday – By this time the tents were looking a little dishevelled and a quick kit tidy was necessary. The resulting photo looks like the scene from a plane crash site! Not deterred by the weather we set to lunch in a “Backwoods” style. Burgers, onions, tomatoes, trout, chocolate in bananas and not all in that order. In the evening we went to see “The Incredible Four” and incredibly the leaders stayed awake.

Wednesday – We thought it was about time that we explored our site so off we walked. Akela introduced the cubs to “Faithful sticks”. You may have noticed these items amongst their kit. A faith full stick has many uses….moving nettles caring a rubbish bag etc but boys being boys need I say more. The weather oh I wont go on about that we just got on with it, I suppose. So off we went to Mudiford for a spot of crab fishing. This was one of the most popular things we did. Then back to camp for tea and later Ghost Stories (not too scary mind)

Thursday – During the week we ran a tuck shop but a camp is never complete without the ritual blood let known as retail therapy. Poole was the answer to our needs. After lunch we decided to opt for the indoor pool rather than the beach (it never got hot enough). The pool had an excellent range of diving boards, I’m a big woose but some of them cubs have no fear. Mark was the only leader to get a telling off for jumping instead of diving tut tut. Then home to a nice portion of chips and chicken burgers. The leaders were flagging so a takeaway rounded the day off nicely. A dry night and we actually saw the stars.

Friday – Nearly there now but still time for activities. The cubs had a go at Archery between full kit inspection. I can only say that some of you will have virtually no washing to do. How is it possible to only use 1 set of underwear all week? I won’t go there. So in the after noon we went to “Honeybrook Farm”. Don’t bother with the animals where’s the adventure play ground and shop!. Seriously it was a lovely place well worth the visit. Shame we couldn’t stay longer but we had to go off to the Dogs. We got some funny looks but hey we had been on camp for 6 days it’s difficult to look your best!

Saturday – Will it or wont it. The Scouts in Bude were washed out and it looked as if we were headed that way but someone up there likes us and the Sun came out just long enough to de camp. All dry tents for the 16th consecutive year… sorted!

To sum up…….The weather….. below par. The cubs ….challenging I will say no more. Would we do it again …..of course we will because were stupid. Many thanks to all my leaders who gave there time to make it happen. 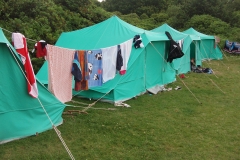 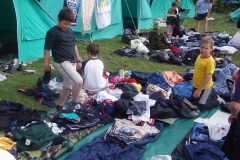 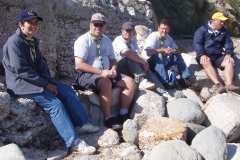 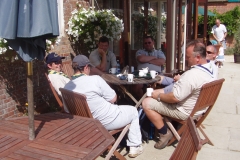 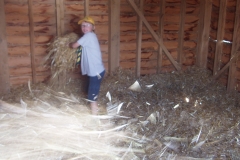 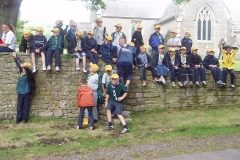 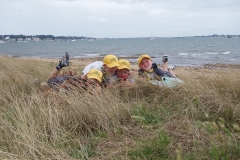 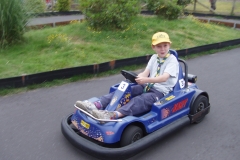