The 2007 Summer Cub Camp took place at “Ferny Crofts” Scout Camp Site in The New Forest. This year due to restraints of leadership we opted for a smaller than usual camp but as they say quality rather than quantity, and as I approach the big 50 I’m beginning to appreciate an easier time. (I may also take this opportunity to point out that Sue will get there before me) We had 13 Cubs, 1 Explorer and 4 Leaders. To get around we hired 1 Mini Bus and a Luton Truck for the gear and Jane brought along her car just in case (more of that later).

Saturday – We had a reasonable trip down with 1 stop for lunch at Rownhams Service station on the M27. On arrival it was all hands on deck to erect the tents and set up camp. The campsite was a lot quieter as most groups had opted for camping at the start of the holiday. First nights on camp are always late and noisy, this was no exception.

Sunday – With the weather being so unpredictable this year we were expecting the worst but first light saw blue sky and the promise of some late summer warmth. John and Annett Sears from 2nd Ickenham dropped in for a visit and were soon joined by Mike and Angela Day (Mike is our Scout Leader if you weren’t aware). The boys eagerly awaited the afternoons Target Shooting but before that we had to explore the campsite. Whilst on our walk we collected stout pieces of branch which are christened “faithful sticks” some parents may have seen these appear on cubs return. The site has some ponds and a lot of water left over from our “Summer” Jack and Daniel Simpson were the first to test it. Mike and Angela never sit around and pitched in with the cooking (thank you) while I sat fettling them faithful sticks. I spent some time cutting and carving these things so don’t use them for firewood! After tea we set the fire up and the cubs entertained us with jokes. Its funny how the theme of the gags never changes from year to year.

Monday – Again another lovely start to the day. I wanted to show the Cubs how easy it is to cook on an open fire so with our guidance they had a full english cooked in the traditional fashion. All the proper techniques, no incinerated sausages or blackened billies! It being Bank Holiday Monday we decided to head off to a less populated beach at Lepe near Calshot Point. The tide and currents here are very strong so unsuitable for swimming, still you can still chuck stones at Ben for entertainment. As with most evenings we were serenaded by owls and bitten to pieces by the mosquitoes. The squirrels were almost extinct but were replaced with extremely tame Black birds and Song Thrushes who would fly into the tents for a quick feed.

Tuesday – I got up early most days just to enjoy the piece and quiet but it doesn’t last long and soon the boys were up and vocal, morning didn’t just break it got damaged irreparably. After breakfast we tripped off to Mudiford for a spot of crab fishing. Unfortunately I reckon someone told the crabs because our catch was to say the least disappointing. The tide went out revealing large pools and a pebble free beach, time to kick sand in Akelas face. Then back to camp for tea, campfire and story. That’s how we like to do it…fun, food and scare the hell out of them!

Wednesday – By Wednesday the boys kit was looking a little disorganised so a full kit inspection was necessary. After some investigation it appeared that most of the cubs were washing and changing, either that or they were very convincing fibbers, they even told me they had a shower. When all was packed away we went off to Moor Valley Country Park and time to get rid of some energy. Then back to camp for a late evening meal. After a short rest we embarked on our manhunt for Ben who had hidden himself somewhere on the site, too good I might add as they never found him!

Thursday – We had a continental Breakfast because we were on site at 9 AM for Archery, Wall climbing and Abseiling. The climbing is quite testing and all the boys had a go. In the afternoon we were off out again to visit The Otter and Owl Sanctuary. They had, as you would expect rather a lot of otters and owls and of course a shop where weaker souls can indulge in a spot of retail therapy. With time to spare we drove to Southampton to see “Transformers”. At nearly 3 hours long it’s an epic of noise and mayhem, ideal for kids. The day wasn’t over quite yet so time for a McDonalds. (none for the leaders because they won’t eat their take away later)

Friday – Nearly there now but still time for another trip out. We loaded up again and set forth to Beaulieu Museum. I took a lot of pictures and Steve should have posted them by now. The high light was interacting with the Lord and Lady, The Maid, The Butler and also a Bobby. Lord Beaulieu even got them singing round the piano. (They’re not real just actors you know). So very tired and money all spent we returned to camp.

Saturday – No problem with the weather and all dry tents for the 18th consecutive year… sorted! It was a short journey home but not without some drama. We had to leave Jane and Sue at Fleet Services because her car didn’t want to go home. So if you missed them they were drinking coffee and chatting up two AA men! To sum up…….The weather…..Dry and sunny all week who would have thought it after this summer of ours. The cubs ….small in numbers but BIG in personalities, parents you know what I mean. Will we do it again? …..Probably if my body holds out for another year. Many thanks to all my leaders who gave their time to make it happen. The End 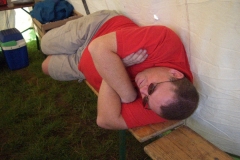 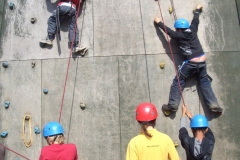 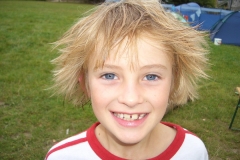 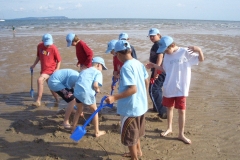 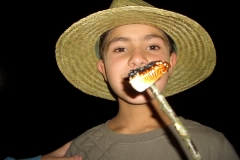 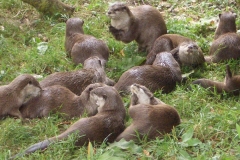 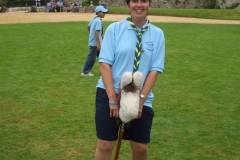 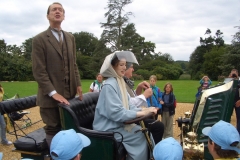 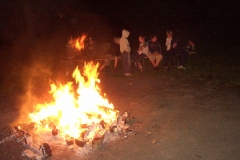